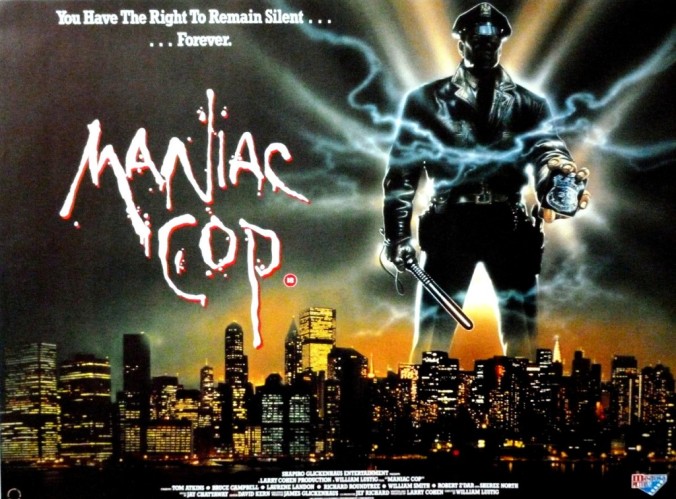 Maniac Cop starring Bruce Campbell, why the hell did it take me 20 years to watch this film? I can remember kids talking about this film back in school, how their dad had a copy and let them watch it, pretty sure they never did though! The title says it all about this film it’s about a police officer with some serious issues.

The film starts as most horror films should with a kill, after a woman escapes two ruffians looking to mug her. She runs for help and finds a suspiciously quiet and stupidly big police officer, so surely she’s safe? Wrong! Things do not end well for her. After this the rest of the film focuses on Frank McCrae a detective who believes the two ruffians story of a six and a half foot tall police officers killing their potential mugging victim.

Then comes Jack Forrest played by Bruce Campbell, his wife suspects that he is the Maniac Cop killing everyone. Forrest is a walk the beat cop who has been taking on a suspicious amount of night shifts lately, so many his wife decides to follow him and as I suspected she finds out that’s he up to no good.

The rest of the film revolves around Detective McCrae and another police officer Theresa Mallory trying to find out who our Maniac Cop is and why he has decided to kill off everyone he meets. The film ends with a reasonably good car chase before a final dramatic scene, which very clearly leaves things open for a sequel.

Dentist? Dermatologist? Psychiatrist maybe? Our Maniac Cop certainly has many many issues he needs to resolve.

The main positive for this film is the bad guy, he’s well over six feet tall and seems pretty indestructible and also quite scary looking. Although story isn’t  a big strong point when it comes to films like this, his origin is quite good and more than serves it’s purpose for the film.

Some of the acting was pretty decent, Richard Roundtree making a solid appearance as an arrogant and annoying police commissioner, Tom Adkins as detective McCrae, my favourite (barring Bruce Campbell) was William Smith as Captain Ripley who seemed to delight in breaking the news to someone that their wife was dead in a very bizarre scene!

It has some good deaths in and the final chase and encounter is pretty good for a film like this. As I said earlier it’s good that they kept it open for a sequel at the end, however what sort of horror fan doesn’t know that when someone “dies” without seeing them actually die that they’ll be back. And back he was with two sequels I can hopefully review at a later date.

There aren’t that many negative in this film, call me sick and twisted but I’d have liked some more varied deaths before our Maniac Cop is revealed. He only makes 3 or 4 kills before a big rampage, I think the deaths could have been more creative than they were although saying that, there is a good death involves setting cement!

Although Maniac Cop’s origin is quite good how they found out about it in the film was all extremely convenient and felt a bit forced.

I can’t really think of any more negatives and this film was a thoroughly enjoyable big psycho monster kills everyone. For me it is at least on par with some of the later more famous Halloween and Friday the 13th films. 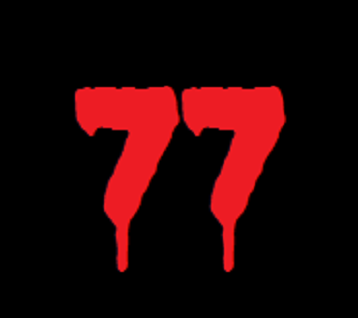