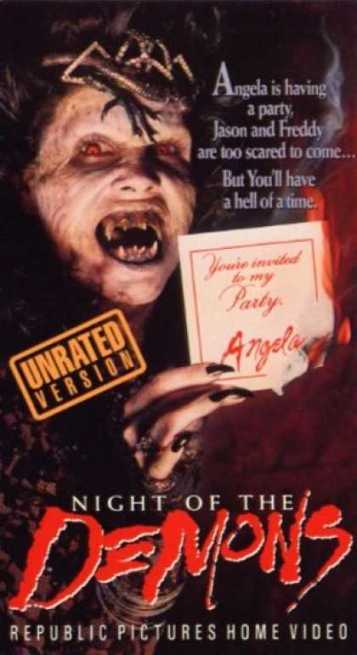 I’ve got the remake of this on my Sky box ready to watch but as everyone knows you should see the original before you watch the remake of any film. So I hunted it down and managed to get it, time to settle down and watch some classic 80’s horror.

Trivia – Had the film opened nationwide with the numbers it earned in Detroit, it was projected to have earned $13 million domestically in its opening weekend – which would have ranked it amongst the top grossing horror films of its decade.

Trivia – Linnea Quigley (Suzanne) and special effects artist Steve Johnson met when she came in to get the mold for her fake breasts done. They were later married.

This film couldn’t be more 80’s if it tried. The film starts by introducing us the various idiot teens/victims who for some reason have decided to have a Halloween party at a stupidly spooky old house. The house is an abandoned funeral parlour with a very shady history like all films you have to wonder why the hell these ten idiot kids would go there for a party. The characters are very 80’s from the big fat loud mouth idiot wearing a pig mask called Stooge to the big haired scantily clad blonde Suzanne who bends over to show her pants to distract two people working in a store so Angela her friend can steal a bunch of party stuff. Stooge and his mates blow a tire out on the way to house and are passed by Judy (probably the main character), Jay, Max (Philip Tanzini) and Frannie but instead of helping Stooge and his mates they mock them and drive off.

When those four reach the mansion they realise how old and creepy it is there, there’s a story that an underground stream runs around the land to keep the evil spirits trapped there. When everyone arrives they have a few drinks do a bit of dancing then for some reason decide to do a seance in front of a mirror. This turns out to be a terrible idea and awakens an evil spirit under the house who traps off the whole plot of land with a massive wall. The spirit slowly possesses the teens and there’s some cool deaths. The film then focuses on a couple of the teens who try to escape from the house.

I’d have liked more gore, it might be a bit picky as there are some good gore scenes but with so many victims in that house I would have liked a bit more. Whilst the story serves it’s purpose like many films with similar stories you find yourself asking why? and what are they doing? quite a lot through the film.

Probably the most gruesome death in the film!

This film is so 80’s so if you’re into that era then this is a must see. I’d recommend watching this to anyone, it has flaws like most movies but they’re worth putting up with for the good points and seeing a lot of the annoying characters get what’s coming to them!