This film interested me mainly because it’s got Kurt Russell in it, when I saw that Patrick Wilson was also in it along with Matthew Fox and smaller roles for David Arquette and Sid Haig I thought it was an odd mixture for a horror film. With my interest peaked I thought why no give it a watch and I’m glad I did.

“This film includes one of the most brutally realistic death scenes you could want to see.”

Trivia – After reading S. Craig Zahler‘s (Writer and director of the film) second novel called “Wraiths of the Broken Land” (2013),Kurt Russell stated that “Zahler’s a fabulous story teller whose style catapults his reader into the turn of the century West with a ferocious sense of authenticity”. The phrase is written on the back cover of the book.

First off for a film with a relatively small budget to attract the cast it did says a lot about the film, the actors were that impressed with the script that they all signed on for the minimum figure. The film starts off quite brutally with Sid Haig and David Arquette’s characters having just killed some travelers and stolen all their possessions, even this simple scene is written and acted out perfectly setting the tone for the rest of the film. 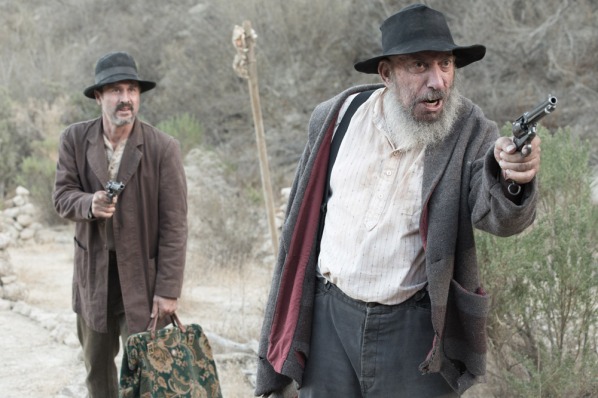 Who doesn’t like seeing Sid Haig in a cameo role!

We’re then taken to a small town where Patrick Wilson’s character Arthur is injured and annoyed to be missing out on work, he’s with his wife Samantha (Lili Simmons) who is also a doctor. David Arquette’s character stumbles into a bar after burying his gun outside of town, he looks quite distressed after him and Sid Haig disturbed the sacred burial site of some very pissed off cave dwelling psycho Indians. Unfortunately the Sheriff’s deputy deputy (yep I meant to write that twice) Chicory played by Six Feet Under’s Richard Jenkins saw him bury the stuff and reported it to the Sheriff played by Kurt Russell. This lead to a confrontation between Sheriff Hunt and David Arquette’s character ending with Arquette taking a bullet in the leg.

After helping the Sheriff, Matthew Fox’s character: a brash Indian killing smartly dressed cowboy named Brooder is send to get Arthur’s wife to treat the wanderer Arquette. This is what kicks the film off when the Indians return to get the wanderer they also take Arthur’s wife and the Sheriff’s deputy. The film is then about the long trip to get back the people taken by the troglodyte Indians, this part of the film is a real slow burn but superbly done. We see great acting from Kurt Russell, Matthew Fox, Richard Jenkins and particularly Patrick Wilson as they make their way to some caves to attempt a rescue.

As I said this is a slow burn but the last half hour or so is brutal with lots of kills and more importantly great acting.

Most of the film is a brilliantly acted Western road movie

As I said it says a lot that the actors signed on for low pay just because they loved the script. The story is overall a simple one, hostages taken and a party sets out to get them back. However it has quite a lot of depth with Arthur (Patrick Wilson) making his way despite being injured and lots of well acted scenes including some brewing trouble between Brooder and Chicory. I guess I’m trying to say the acting and story is brilliantly executed. Although there’s not that much action until the end all the action scenes are well done and for me probably most importantly for a horror film the opening scene gripped me straight off the bat.

Is a slow burn a bad thing? In some people’s eyes this could be too slow, there’s only a bit of action in the first 15 minutes or so then it’s all about the travel to the caves. I think some people might not like this but I did. As much as I loved this film and the rating will tell you how much I thought of it, it doesn’t have much rewatchability like other top horror films, this is a byproduct of having a slow burn film. First time round the slow build is fine but there’s no need to watch it a 2nd, 3rd or 4th+ time like other great horror films.

This film includes one of the most brutally realistic death scenes you could want to see. Someone is scalped and that’s just for starters, what follows that is brutal. If I had an awards system on this website it would definitely be up for the Best Death Award.

This is a perfectly acted film that starts as a horror movie, switched to a Western road adventure for 90 minutes then ends as a brutal horror. The script is brilliant and considering this is S. Craig Zahler‘s first directorial role it’s also directed brilliantly.