I can’t resist it, it’s time to review another found footage film. I was attracted to this one after seeing the cool cover and the story is a bit different as well. Luckily it’s on Netflix so I was easily able to find it and watch it.

“I know found footage has to build up the tension and add some mundane parts of life into it but I think this should have been more of a documentary style as those were the best parts.”

This film follows five friends Brandy, Zack, Bobby, Mikey and Jeff (also the names of the actors playing the characters) as they hire an RV and travel around America trying to find the scariest haunted house on Halloween. The found footage aspect of the friends is spliced with interviews of people who work at haunted house attractions and people who visit these places. After visiting a few places that seem to be run of the mill haunted houses they run into a couple of people who claim to have heard of the ultimate scare and they tell them where to head.

As the group make their way there several very odd things start to happen, someone films themselves entering the RV and leaves the tape there during the break in they had also left a bleeding animal heart in the fridge. They also pick up a girl dressed as a creepy porcelain doll, her car had broken down but as they let her on the RV she just stares at them screams and then leaves. They also run into a few other clowns who surround the car before eventually being kidnapped for the ultimate scare? or is it all real? 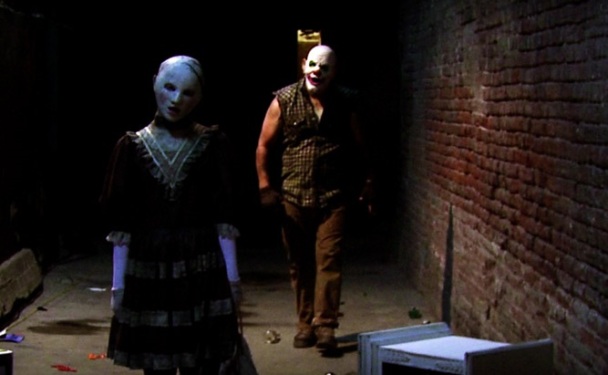 The characters are all natural in their roles I guess that’s because they were effectively playing themselves, that and found footage films are the easiest to act in out of all the horror sub genres if you can act like yourself you’re fine. The documentary interviews added to the film also help with the atmosphere of the movie. There’s some quite creepy people that they run into on their journey as well. Even right up to the end you’re never quite sure if everything is all part of the scare or if it’s real, I’d guess the latter but you’ll have to make your own mind up.

Is it real or is it all part of the scare?

For me there were too many pointless visits to bars and other haunted house attractions. I know found footage has to built up the tension and add some mundane parts of life into it but I think this should have been more of a documentary style as those were the best parts. I found the characters a little boring outside of the woman and the bearded bloke the others were just bland.

This is worth a watch only if you’re really into found footage films, if you’re not then I’d advise you to stay clear of it. Bit of a short review this as there really isn’t a great deal to talk about when it comes to this film.