A few years ago my parents recommended that I watch a show called American Horror Story, I’m not too keen on ghost type things but decided to give it a go when I found out the second season would be completely different. Recently I’ve read a few articles where people rank the seasons and I tended to not really agree with any, so I thought I’d do my own article from worst to best season………

Now I realise this isn’t a popular opinion but I did not enjoy the season that started it all off. I’m not sure why maybe it’s because I’m not always keen on ghost stuff but I found myself wanting it to end. I felt out of every season it had the worst set of characters I didn’t like the parents or their child.

Despite this the series started off well, well enough to keep me interested in seeing how it all ended but it just wasn’t to my tastes at all. I did enjoy the Larry Harvey character and the maid was really creatively done, having one look for men and one for women was an awesome idea. Obviously Jessica Lange as Constance Langdon and her daughter were a big highlight of the season.

I loved Denis O’Hare he’s always good in every thing I’ve seen him in, I just wish he was in more things!

Where do I start?  This season disappointed me immensely. Sure it had it’s highlights but overall it could have been so much more, so many wasted characters and serious issues with pacing. I was really looking forward to this season, given the setting of a freakshow seeming perfect for a brilliant story to unfold.

The highlights and there were quite a few for me was Amazon Eve beating down the Strong man, Twisty is so damn good that I’ll be dressing as him for Halloween and surprisingly Dandy turned into the best thing on the show. Finn Whitrock played the spoilt little rich boy with a taste for murder perfectly and he simply got better and better as the show progressed.

My main problem was that after eight episodes I started to lose interest in the characters quite a bit other than seeing what would happen to Dandy Mott. Annoyingly I think that this is Jessica Lange’s best character and I consider Edward Moordrake to be the best character to ever have come from American Horror Story.

This season got a bit of a pummelling at times on social media but I really enjoyed most of it, it is however worth noting that it’s not that far ahead of Freak Show. I find both had the same issues poor pacing which saw them fade badly towards the end. I know that it sounds harsh and I did enjoy most of both series just the last four episodes seem to drag on.

The overall story was great for some characters and some were under or misused. I was worried about Lady Gaga being in this show as I wasn’t sure how her acting would be. I was really surprised and she quickly became one of my favourite characters in the entire American Horror Story Anthology. I also consider Denis O’Hare to have given his best performance ever with his portrayal of Liz Taylor a boring business man who became a colourful transvestite thanks to the Countess inspiring him to be himself. I also loved Evan Peters as James March the builder of the hotel who still remains around the place as a ghost.

Some stories missed the mark for me Sally and her demon gimp was just plain odd, I wasn’t keen on the storyline of Kathy Bates character Iris and it mostly bored me until her last few episodes. The fashion designer buying the hotel also didn’t interest me a great deal.

Lady Gaga’s American Horror Story debut worried me but she smashed it and I really look forward to seeing what she does in the next season.

I’m glad this season was so good, I loved the concept of witches in the modern world and I wasn’t disappointed. Angela Bassett’s performance as Marie Laveau and her voodoo was fantastic. As I said the whole concept of the show was great, with Jessica Lange’s Fiona unwilling to make way for a new supreme to take over as head of the coven. The training of the young witches and the ending of the season were all brilliantly done.

I thought Sarah Paulson gave her best performance in any of the seasons in this one. I’ve never seen a power like Queenie’s in anything before, the human voodoo doll was so creatively brilliant. Add in Emma Roberts playing her usual type cast role to perfection with Jamie Brewer as the psychic Nan and Taissa Farmiga being the one I expected to become supreme and you’ve got an excellent group of characters. I felt many people in this season gave their best performances they’ve ever given in their American Horror Story roles. I also think this was the best ending of all the seasons.

One major thing that stopped this being my favourite season was the story of the young witches bringing Evan Peters’ Kyle Spencer back to life. It really limited Evan Peters and the whole story quite frankly sucked but did pay off in the end.

Best Character – Does Papa Legba count? If not I’ll go for Queenie the human voodoo doll! 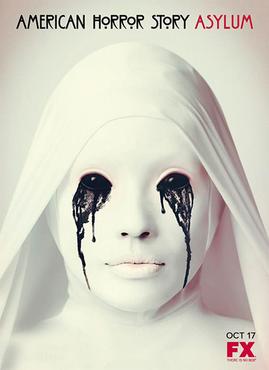 So here it is as you’ve worked out Asylum was my favourite season of American Horror Story. From start to finish I loved this one, maybe it’s because this whole era fascinates me and in a morbid way so does the treatment of people in asylums from this time period, it amazes me how poorly they were treated and this is more than put across in this season. This has many of the characters in great roles that really fit them as actors.

I love the demon nun played by the awesome Lily Rabe, the evolution of her character from tame Sister Mary Eunice to a spiteful and quite frankly evil nun once possessed is great viewing. Add in Jessica Lange who starts as possibly the best “villain” in all of American Horror Story and you’ve got two great characters you want to see get their dues. I am disappointed we didn’t see Ian McShane pop up in Hotel, he plays an excellently evil murderous and rapist Santa. James Cromwell as the evil Nazi doctor Hans Gruber I also think is another evil character fantastically done.

I felt that this had Evan Peters in his most likeable role as Jimmy. The ending of this show was great not quite as great as Coven but pretty close.

Anyone who knows me knows I loved this character. Watching her change was probably the best acting I’ve seen in American Horror Story.

You can find me on Twitter @ABsHorrorshow but please don’t curse at me or give me too much grief, I know that my list is completely different to everyone else’s that I’ve seen. Especially in not liking Murder House but I do see a lot of people put Asylum at number one!