Well I sat down and watched I Know What You Did Last Summer and after enjoying the easytowatch-ness of it I thought why not give the second one a go as well. Here’s my thoughts on the sequel……

Budget: $17 million estimated (oddly listed on IMDB as $65 million, which is surely miles out)

This film is set one year after the events of the first film, Julie James (Jennifer Love Hewitt) has moved to Boston college to escape the small town where her friends were brutally murdered. We also get to see that her and Ray (Freddie Prinze Jr) are having problems with the long distance relationship, these pick up most when she refuses to go back to the town with him and he can’t get time off work to spend with her.

Enter Will her pal at collage who is clearly trying to get her in the sack (or is he?) this is where Julie’s roommate Karla (Brandy Norwood) just happens to get a phone call on the unlisted phone, the call is from a local radio station who asks her a simple question, what is the capital of Brazil? When she answers correctly they win an all expenses paid trip for four to the Bahamas.

Karla brings her boyfriend Tyrel (Mekhi Phifer) and when Ray doesn’t make it Will is willing to join the group and go with them. They all head off to the Bahamas and once they arrive we meet the token stoner played by Jack Black, the stereotypical arsehole manager/owner of the hotel brilliantly played by the magnificent Jeffrey Combs.

Once there it’s revealed that the last boats have left as a wild storm approaches and there’s no getting off the island, unluckily for them this is when a psycho killer starts killing people but there’s no way out. Que the chases, people disappearing, Julie not being believed and even a shout at the killer whilst I’m out in the open rerun of the scene from the first film. 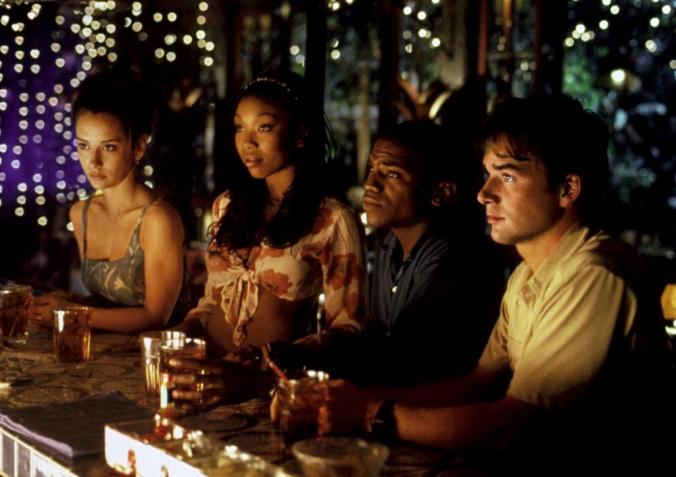 A storm makes the island virtually empty, great planning by the radio host/killer

Jeffrey Combs is the highlight of this film he’s underused as it’s obvious the good looking teens would feature more prominently than him. The acting is pretty decent all round for this sort of film and as usual with these Hollywood features the production is top notch.

Some of the chase scenes and the final fight are quite entertaining to watch.

I quite liked seeing how Ray would get to the island to help after he discovers that Julie needs help, although the timing of his arrival is as you’d expect super convenient.

Jeffrey Combs as the constantly annoyed hotel manager, as I expected he’s class

Once again not enough blood for my liking, I can cope with not much gore but only if the story is done well enough. In my eyes basic killer stories should feature a couple of gruesome kills.

The “twist” that they throw in at the end is so obvious it’s painful and when the villain reveals themselves and points out something so obvious as to their identity it really is ridiculous. There’s various story elements that make you sigh throughout.

It does have entertaining parts, the bar woman is a decent character and as I mentioned the setting is pretty good. If you’ve watched the first one it’s worth seeing this one but don’t expect anything new it’s just the first film but in a different location. It’s not quite as good as the first but it’s close.