I must admit when I had Netflix I just browsed past this film thinking it was some sort of kids thing, however after I actually stopped being an idiot and looked up what it was about I decided to give it watch and I didn’t regret it…….. 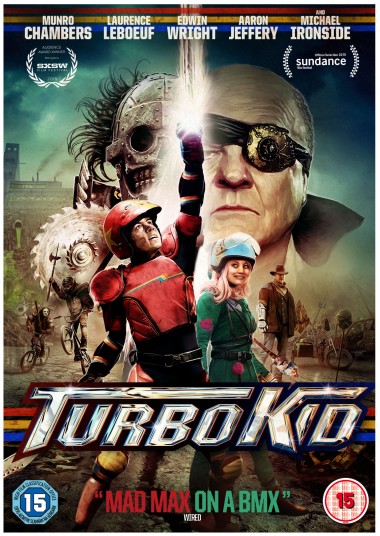 Trivia – Turbo Kid is a feature film adaptation of a short called ‘T Is for Turbo (2011) ‘ which was originally submitted by the directors team, RKSS, to producer Ant Timpson‘s ‘The ABCs of Death (2012)’ horror anthology.

Trivia – The movie was supposed to be set in a desert wasteland, but due to rainy weather during filming, the “acid rain” was included in the storyline. Ponds and puddles were tinted green to simulate this.

First off this film is mental but in a good way, we start off following a character called The Kid who’s in a futuristic world where some sort of war has ruined the land. Water is in short supply and The Kid has to scavenge and trade for water, he lives on his own in some sort of bunker filled with junk he’s found.

We meet Frederic the arm wrestler and this is how we’re shown how brutal the world is when he arm wrestles with the loser getting branded on the hand. The Kid leaves after trading some items for a comic of his favourite superhero Turbo Rider. He sits down to read the comic and it’s here he meets Apple, a needy young lady who The Kid find quite annoying but eventually ends up liking after stalks him. 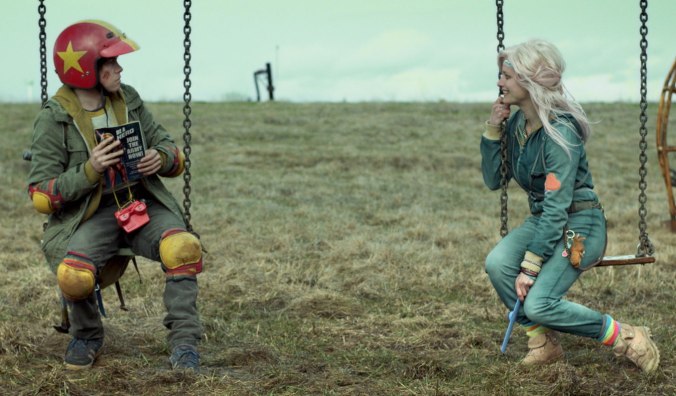 The Kid really isn’t keen on Apple when he first meets her and who can blame him?

The Kid gets chased and conveniently falls into a hidden room where he find a suit that turns him into a superhero. Luckily for him this is around the time Apple is kidnapped and made to fight in a swimming pool along with Frederic, however The Kid now has a super suit and goes along to help. Through a series of flashbacks we find out that The Kid has a score to settle with Apples kidnappers, Zeus the man in charge and Skeletron his iron masked sidekick.

The film goes completely bonkers here with The Kid’s super suit giving him the ability to explode people and boy do a lot of people explode. The over the top score sprays blood and exploding heads all over the shop. I loved it, it’s so obviously fake yet so brilliantly fun to watch.

At times there’s so much gore they need an umbrella!

Behind all of the gore though is a really good story about a young lad alone in the wastelands who’s only friend in the world gets taken and he has to get her back. Add in a couple of twists here and there with most being pretty predictable I must say and you end with a really well filmed story brought to life with gallons of blood and some really good humour.

You know I’m going to mention the gore at least you should if you’ve read any of my other film reviews. In parts it reminded me of Tokyo Gore Police ( which I reviewed HERE!), overall there’s not as much gore as that film but there is quite a lot and it’s in a similar style.

The fact it’s set in the post-apocalyptic world and it’s 1997 is a great idea, the whole film feels very 80’s in it’s cheesy looking bad guys. I loved the whole setting of the film and the way everyone used push bikes as there were no motor vehicles around. 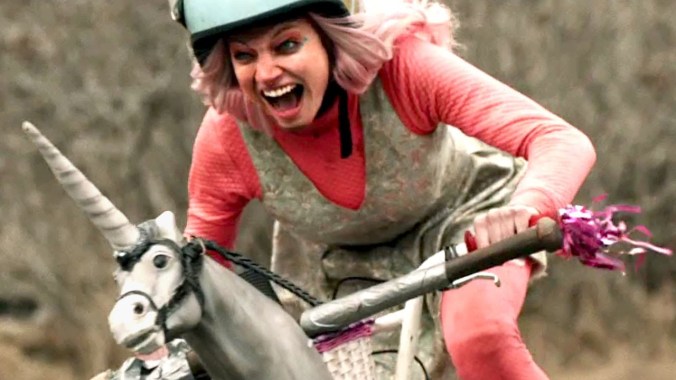 The relationship between The Kid and Apple is fantastic and you really feel for both of the characters as the film moves on, add in the unlikely friendship The Kid forms with Frederic and you’ve got a real good dynamic between the main characters, joined together in their hatred of Zeus (apart from Apple who’s so bonkers she seems to love everyone)

I guess if I had to be picky I’d say some elements of the story are extremely convenient, this doesn’t ruin the film in any way but I could see how some people might be annoyed.  The way The Kid gets his super suit is stupidly lucky and like I mentioned earlier some of the twists and plot line elements are a bit basic. Then again why over complicate things when the film carries itself so well anyway. 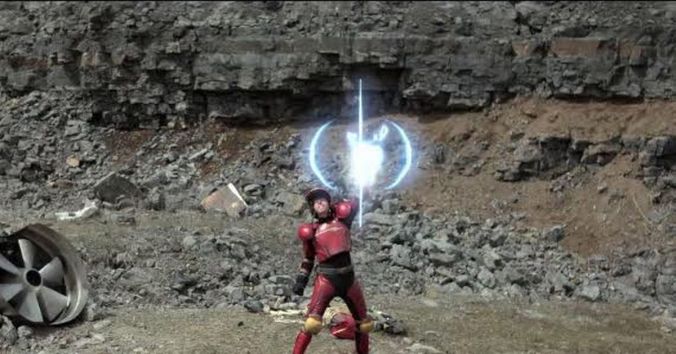 I’d highly recommend this film to anyone with a love of gory films, it kind of lulls you in to start with then all of a sudden BAM! you’re hit with some over the top gore and great humour. Everyone acts their characters perfectly and with the villains being so over the top evil it all gels together to form a superb experience. 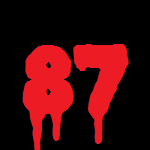