Once again I was browsing what to watch and I’d seen this one a few times but never pressed play. After a quick read of what it was about, I thought why not give it a go. The concept sounded unique and I love a film that’s mostly set in one place.

Trivia – “Pontypool” was produced as both a motion picture, and as a radio play. Both versions of “Pontypool” were influenced by Orson Welles‘ infamous radio production of “The War of the Worlds.” The radio play was broadcast on the BBC’s Art & Culture section of their World Service website. It is approximately 58 minutes long, as opposed to the film’s running time of 95 minutes.

Trivia – Tony Burgess, the film’s writer and the author of the novel on which the film is based – “Pontypool Changes Everything” – makes a brief cameo in the film as the male singer of Lawrence and the Arabians. His character is credited as “Tony (Lawrence)”. (In fact, at the end of the scene where the singers have performed for the bemused Grant Mazzy, Mazzy himself actually refers to Burgess’ character as “Tony Burgess.”)

The film starts off with Grant Mazzy making his way to work as a radio announcer, on his way through a blizzard he runs into a strange under dressed woman who after winding down his car window, repeats his words and then disappears leaving him spooked.

When Mazzy arrives at the radio station to go on air and read out some small town news and announcements, we find out from the interaction he has with Sydney (Lisa Houle) his producer that Mazzy used to be some sort of shock jock and is now stuck on local radio.

Before long Mazzy gets reports from the helicopter reporter that there’s some sort of riot going on in the town outside the offices of Dr. Mendez. Although the reporter gets cut off he returns later to say someone is with him and they are speaking incoherently at him.

Suddenly the call is cut off again by a message in garbled French. Once translated by the third radio worker Laurel-Ann (Georgina Reilly) it is an instruction to remain indoors, not to use terms of endearment, phrases that conflict, or the English language. It’s here that Pontypool is declared under quarantine, we then go through a series of strange happenings reported by the helicopter reporter.

Eventually this leads to Dr Mendez finding his way to the radio station, it’s hear he reveals a theory that somehow the English language has been infected and some words turn people into zombie like creatures hell bent on killing people.

The rest is a struggle to survive inside the radio station and it’s here where the film has beautifully built up the tension that things get really good.

Stephen McHattie as Mazzy is a wonderful performance, I was really impressed with him it’s like he was born to play this sort of character. His demeanor and everything was just brilliant. Add that to Sydney (Lisa Houle) and Laurel-Ann (Georgina Reilly) and this makes the main cast very strong. They may not be the most well known but this was some spot on casting.

The pacing of the story is genius slowly building up tension of what’s happening outside the radio station in the town, before eventually slamming everything at the remaining characters. As I mentioned I love something set in one place and that’s part of the reason I enjoyed this film.

The post credits scene, I’m guessing they had some spare budget that needed spending. Although it’s a pretty pointless scene it’s still fun to watch, so stick around until after the credits role. 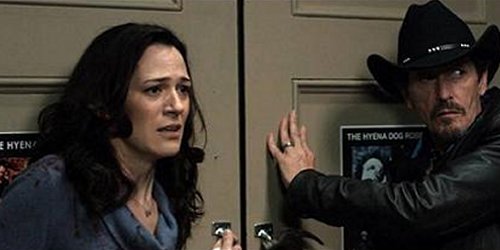 Mazzy and Lisa trying to escape what’s come from them

Nothing really stands out too much as bad in this not to a level that would effect the enjoyment you’ll get watching the movie. I found a couple of things a bit too convenient, the arrival of Dr Mendez was a bit dodgy. There’s also a two part reveal about the reporter in the helicopter, the first reveal makes sense then there’s something pointlessly thrown in that added nothing to the story.

Enjoyment of this whole film really depends if you can get your head round the premise of language spreading disease. I always have a quick look around the internet before posting my reviews, to see what others are saying about the film. This one is interesting as I found it quite split on people thinking it was awesome and people thinking it was poor.

It seemed to all boil down to if people liked the idea of language spreading a virus. I wasn’t sure at first but I thought it was pretty well executed and as much as I thought I wouldn’t like the idea I did once I’d seen it in action.

I’d recommend people to give this a watch and make your mind up, it took me a while to decide how I’d rate it. Slow paced but far from boring, a unique idea, great acting and some really tense scenes thrown in all adds up to an enjoyable and very different experience.