Before I went to see The Conjuring 2 (which I reviewed HERE!) I decided to watch the UK mini series that’s based on the same haunting in Enfield. It was interesting to see two different takes on what supposedly happened in that small house to the Hodgson family. After watching both I couldn’t help comparing them but for now here’s my thoughts on The Enfield Haunting mini series. 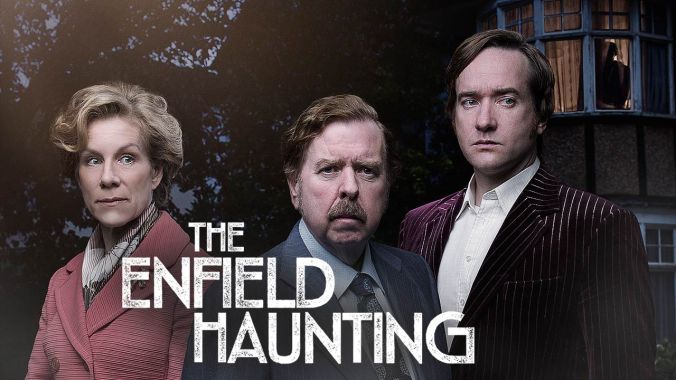 The Enfield Haunting is a case that in real life became very famous in the UK and as such it drew several paranormal investigators to the house to try and work out what was going on. Whilst it’s more glamorous for a film to focus on and embellish the Warrens version of events, this series decides to embellish the story of Maurice Grosse a rookie paranormal investigator.

It doesn’t take long for this series to kick off the supernatural occurrences I guess they didn’t feel the need to build things up. It all starts with some furniture moving about and some strange knocks coming from around the house.

In this one there’s only three children with one away at a boarding school as he’s trouble. It also only really focuses on Janet Hodgson out of the children as she’s the main one that gets possessed. After a few strange furniture movements Maurice Grosse comes along to investigate if it’s real or not, he’s soon joined by Guy Fairplay and the two do not get on to start with.

Fairplay and Maurice try to help the family

As they both test Janet and her claimed possession it doesn’t take long for them to see that something bad is happening here. More and more spooky goings on begin to happen with the main focus on Janet being possessed, leading to Maurice trying to work out who is possessing her and what it wants.

The story of this although mainly about the haunting also draws attention to Maurice Grosse’s marriage and the death of his daughter. Just like Conjuring 2 focuses on the Warrens and how the haunting are affecting them this decides to focus on Maurice. Mainly on how he develops a relationship with Janet as he does his best to help her, incidentally his daughter was also called Janet and she died recently.

Is Maurice only helping as he sees his daughter in Janet or is it a genuine willingness to help? This is the story that fleshes out the haunting and makes this a really good watch.

Amazing how being thrown onto a ceiling can make you believe

First of all, I’d like to praise is Eleanor Worthington-Cox who plays Janet Hodgson she is a fantastic actress, for such a young girl to play someone who’s possessed but also flips to being a normal kid is amazing. Along with Timothy Spall as Maurice Grosse they really bring the series up from decent to great with their acting.

For a mini series broadcast on UK television the effects are bang on, everything that flies around to Janet levitating and Janet’s voice changing when she’s possessed is fantastically done. It all looks so real and not once did I think anything looked fake.

The whole story has a nice pacing to it as they try to work out what’s going on in the house although I think once that’s solved it does drag a little towards the end as it ends Maurice Grosse’s story.

As mentioned above a bit of a pacing issue towards the end which is a pity as the rest built up nicely. I’m not sure what is supposedly true about this case but some of the parts they mashed the haunting with the Grosse’s loss of their daughter seemed a bit dodgy to me, I’d personally have liked it better if that wasn’t as prominent of a storyline as it was.

Other than that there’s not much negative about this series!

I’d recommend anyone with an interest in the Enfield Haunting to give this a watch, sure it fudges some of the happenings to fit with it’s narrative but overall it’s well worth a watch. If you like possession or haunting type films this has a high production value and some cool little effects thrown in, it’s really worth watching for the portrayal of Janet Hodgson and she really steals the show.