I don’t know why but I hadn’t seen this film despite me having a big interest in anything that is supposedly based on real life. When I was thinking of what to watch I decided to rectify that and give it a go, I was not disappointed that I did and only wish I’d done it years ago.

Budget: $1 million
Run Time: 99 minutes/102 minutes uncut
Trivia – A very eerie coincidence occurred for the second unit crew sent out to get footage of the Wolf Creek Crater. Since the location was many hours from any town the small crew decided to camp out in their car at the site after shooting. During the night a mysterious stranger showed up in a truck to investigate. The stranger indeed looked very much like the character of Mick Taylor, right down to the rustic truck. The stranger left, but the crew was so spooked that they drove an hour down the road before finally stopping to camp for the night.

Trivia – John Jarratt is a method actor and spent weeks living in the Australian desert preparing for the role of Mick Taylor. In addition he also avoided bathing before shooting so he would have a much more rugged appearance. Furthermore, the idea for Mick to have a creepy laugh was Jarratt’s own (he says it took him four months to get it just right), and he also created a detailed biography for the character (although he wouldn’t reveal the details to anyone). He also stayed in character between takes!

The three characters makes their way across Australia, should have just stayed at home.

Wolf Creek is loosely based on real life and according to the writer of the film the killer is a a mixture of three well known backpacker murders in Australia. The story starts out with two women and a bloke driving across Australia on their travels they stop and do what young people do, get drunk.

However they also decide that they will take a trip to Wolf Creek where there lies a massive crater in the Australian outback. After picking up a handful of supplies they arrive at Wolf Creek park up their car and make the three hour trek in some dull weather.

They admire the amazing scenery and head back to the car, however once there they find the battery flat and no one around for miles and miles to help. They bed down for the night and are approached by a real outback Jack type bloke who offers to help them.

Mick just wants the help out!

They try to ask for a lift into town but he’s not going that way so they agree to go to his place where he can fix the car, even though there’s something clearly “off” about the bloke. Once there they have some food and water and get to know Mick and a bit about him and his home.

Things soon go wrong as Liz wakes up in a shed and can’t see her friends anywhere, she manages to escape and sees that Mick has tied up Kristy. He’s giving her a bit of torture and he’s about to sexually abuse her. Liz sets fire to a car to distract him and escape with Kristy.

They don’t know that their friend Ben is locked up in some caves and they try to make their escape. There’s a few tense chase scenes and we really get to see how sick in the head Mick is as Liz explores his home looking for weapons and a vehicle to escape in.

This all leads to one massive chase at the end as the girls try to escape. Mick chasing people and taunting them is what really makes this film a great watch. 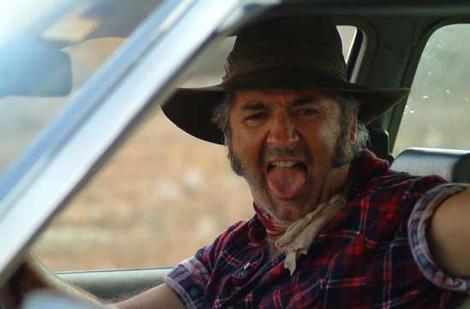 Taunt as you chase
The Good

It has to be John Jarratt as Mick Taylor, his portrayal of a deranged loner who loves to rape and kill is fantastic. You can tell he’s a bit odd at the start and then once he’s revealed as a psychopath with a love of killing he goes full on head case brilliant. Not sure if it was on purpose but he can be a little cheesy which only makes him even better.

Wolf Creek manages to pull off what most other films can’t and that’s having three characters who are likable from the very start, sure Ben is a bit of an idiot but not in an annoying way. These three play their parts well and we get a good start to the film that puts over the bond they all have.

The violence in the film is used sparingly but when it is used it’s quite brutal and realistic which adds to Mick’s character. The ending is also brilliant, the last police chase and the way Mick is during it is class.

I love Mick, he’s one of the best bad guys I’ve seen in a horror film for ages
The Bad

There’s a few bits where the victims make you think don’t do that! But apart from that there’s not many other bad points about the film. I suppose Liz discovering what Mick is was a bit too convenient, stumbling on the place he keeps his trophies which just happens to have some incriminating video on it.

I’m guessing most people that follow me have seen this if you haven’t then go get a copy and watch it as soon as you can. This is a must see for horror fans, a really good film with a creepy and brutal killer. Also the real life element of it adds to it, although we’re not sure how much is truly real.