I tried to watch this awhile ago but had something interrupt my viewing and I had to turn it off after about half an hour. For a few months I never did get round to watching it again despite enjoying the bit I saw, I was bored and looking for something to watch and thought why not finish this off?

I’d seen Abraham Lincoln Vampire Hunter and I enjoyed that but I was unsure this film would be as good but it was better. Set in an alternate 1800’s where a zombie plague has taken over much of the country. Colonel Darcy arrives at a rich families home, he suspects a newly turned zombie is at the posh dinner party, when first turned it’s hard to tell if someone is a zombie or not. Darcy has a cool trick where he releases flies and when they stop buzzing they’ve landed on the zombie and then comes the carnage.

We’re then introduced to five sisters who are the Bennett sisters who’s Mother is after some rich people to marry her daughters off to. However Elizabeth isn’t keen on being married off to her cousin who is a total tit.

The surprising thing about the sisters is despite their elegant appearance all of them have been highly trained in fighting skills I assume with and without weapons. This leads to them slaying zombies left and right in some really good fight scenes.

Obviously there’s a romantic element throughout the film and it’s a bit predictable as the fiery Elizabeth hates Darcy at first and her hatred is only furthered when he kind of accidentally ruins her sister’s relationship with his friend Bingley.

The romance element is further complicated when George Wickham appears, he has a history with Darcy and at first Elizabeth seems to be interested in him to make Darcy jealous. However it’s clear that he can’t be trusted from the moment he first appears. This relationship also furthers the zombie plot as we find out why the zombies have started to attack with some sort of purpose as opposed to random attacks.

Everything leads to a really exciting last half hour or so as Elizabeth realises she predictably likes Darcy. There’s a really good fight with Wickham and Darcy as Elizabeth races to save her sister and Darcy. 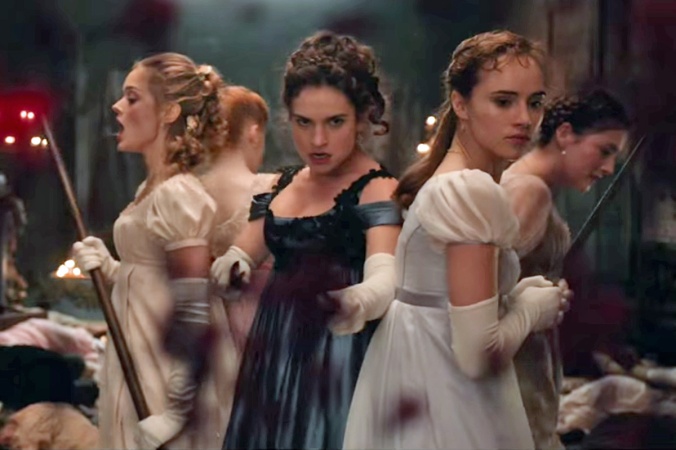 There’s not much else wrong with this film, if you take it for what it is you should enjoy it. Sure the romantic element is not the best but the zombies kills and final half hour more than make up for any dislike you may have of the romance. I’d recommend this to anyone who likes a horror with some comedy elements even though it could have been so much funnier.