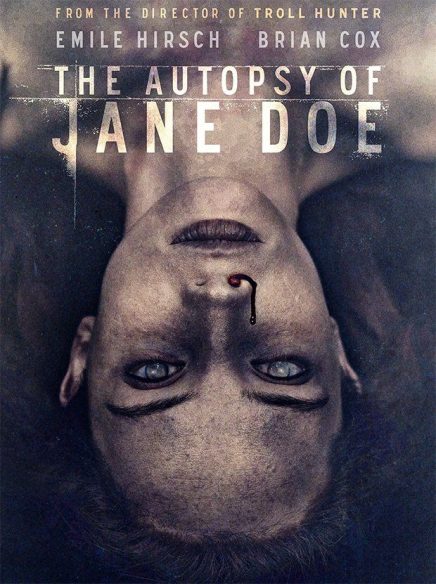 I’ve seen a few people talk about this film and it’s got some really positive reviews behind it, including Stephen King tweeting about it being a good film. So what better to do on a Sunday afternoon than lay down on the sofa and watch someone dissecting a corpse. Also directed by Andre Ovredal who directed the excellent Troll Hunter was the factor that made me give this a go.

This film begins with a really well shot and scored scene of Tommy Tilden showing his son Austin how to find the cause of death of the latest corpse on their table. Austin is being trained in the family business I presume to eventually take over from his Father. Soon we’re joined by Austin’s girlfriend who wants Austin to tell his dad he plans to quit and make a different life for himself.

However on his way out to a date with her the Sheriff brings a fresh body found in a house were everyone else was murdered, the corpse however has no signs of anything wrong with it from the outside (apart from it being a corpse silly!). Intrigued by the case he blows his girlfriend off and helps his dad try and find the cause of death, which the sheriff wants the next morning.

It’s here the film develops it’s mystery element as they cut the girl’s corpse open and try to work out what happened to her the mystery just deepens. They pull things from her body that shouldn’t be there, find that some of her organs are working, then they cut into her and things really go all to hell.

The horror element kicks in here big time unable to escape their home/morgue due to the storm, doors lock, strange noises that are not their pet cat Stanley echo around, Austin seeing things that aren’t there. There’s a whole bunch of other spooky goings on that are better left for you to see for yourself.

Trapped inside the Father and son team start to piece together who the Jane Doe is, where’s she come from and link it all to what is going on currently. As unbelievable as it is it’s the only answer they can come up with. So it’s time for them to fight against the supernatural goings on and try to survive the night with the corpse.

Overall this is a great film, it’s not an all out horror it’s a horror mixed with thriller and mystery elements. There’s not many kills as such but it has a really enjoyable build up and a very good ending. I’d recommend anyone watch this film it’s a great ride and well worth 86 minutes of your day.