I quite liked the look of this one since hearing about it, it’s a British, it’s got zombies, it’s got Gemma Arterton in it, it’s based on what I’ve heard is a very good book so why wouldn’t you want to settle down on the sofa and give it a watch? 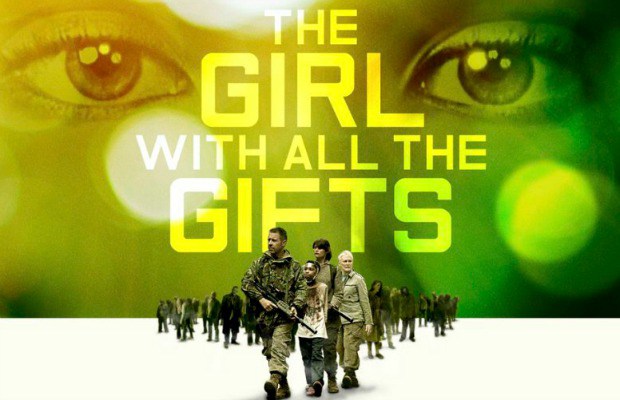 The film opens up inside of some sort of military base where some seemingly innocent looking kids are in their cells before being strapped into a wheelchair and escorted at gun point to a classroom. They’re being taught various things by Helen Justineau (Gemma Arterton) she appears very friendly with the children, however the soldiers do not like this type of thing.

In comes Sgt. Eddie Parks (Paddy Considine) he soon makes us aware that these are not just ordinary children. He rubs something off his skin and as soon as the kids get a whiff they go mental and try to eat him, clearly done to make the far too trusting Helen Justineau realise what she’s teaching. There’s a blocking cream that they wear to stop the kids from wanting to eat them.

Dr Caroline Caldwell played by Glenn Close uses the kids to try and make a cure for a fungus like infection that turns people into zombie like creatures with an overwhelming desire to eat any type of animal obviously including humans. Her and Miss Justineau fall out over the Dr’s desire to kill the kids for a cure.

Eventually the base gets over ran by the hungries who have gathered around the base in massive numbers. The only ones to escape are Miss Justineau, Sgt. Eddie Parks, the doctor and a few soldiers but most importantly one of the kids Melanie who’s formed a bond with Miss Justineau. Turns out Melanie is a half breed that retains the ability to think this leaves the Dr really wanting to mash her up into some sort of cure for the fungal disease.

Outside of the base the film is brilliant, we get to see a lot of behaviour that I think is unique to this film from the hungries, at least I’ve not seen it anywhere else before. The group of people with massive trust issues have no choice but to start trusting each other if they are to survive. As the group explore the city trying to make their way to an old lab we get to see further evolution of the fungal disease and what will become of humanity.

That’s really all I can say about the storyline as I think any more would ruin the film and you’re better off seeing what happens for yourself!

The Bad
Other than that there’s not many bad points and it’s close to having the most good points I’ve ever included in one review. It really was an enjoyable film only let down by the ending the kids who sadly feature in the last half hour or so, with a better ending I think I would have scored it much higher. As usual though this is just my opinion and you may enjoy this aspect of the film, even if you end up thinking the same as me you’ll be glad you sat down and watched this one!