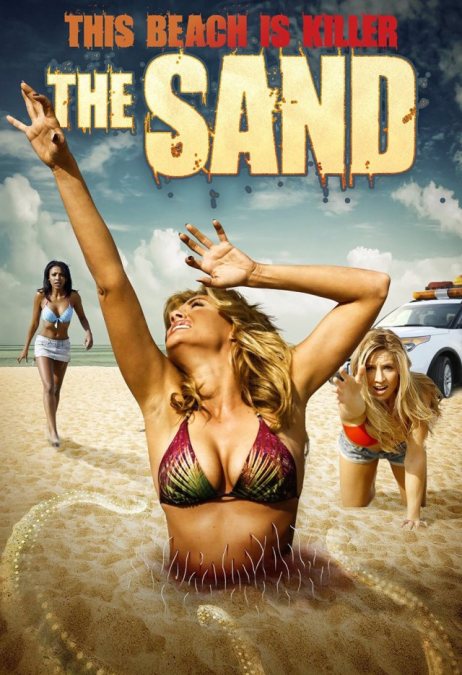 I sat down last night and didn’t have anything to watch there was the usual reality job shows on TV like Can’t Pay We’ll Take It Away and Police Interceptors. Along with the usual repeats of QI, Mock The Week and other comedy panel shows on Dave. I flicked to the horror channel and saw “The Sand” was on, I remember reading about it ages ago it sounded like a fun B movie with a silly but decent idea. The beach was eating people! So why not sit down and give it a watch. 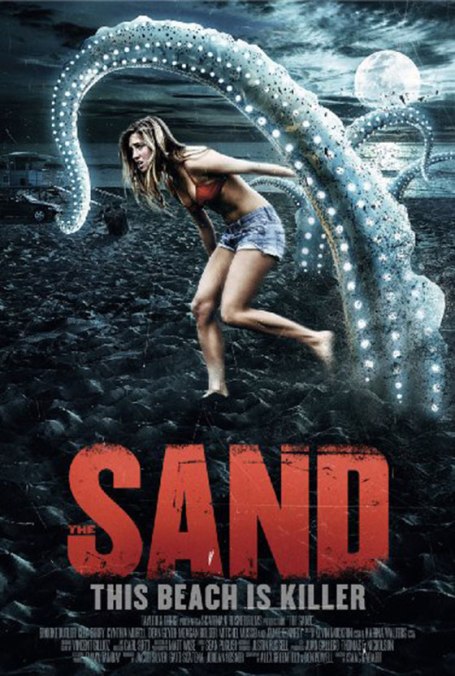 The premise of this film is simple it’s a B movie and it knows it, with all B movies it’s packed with average to poor actors and a script that in places delivers some awful cheesy lines. Nowadays a B movie like this is also crammed with poor CGI and although that’s mostly the case there’s also some pretty decent looking deaths in this one.

A bunch of awfully annoying and mostly beautiful teens throw a party on a beach with Vegas rules. This means all the phones are put in a bag and locked away in the trunk of a car so what ever happens on the beach stays on the beach. Then the drinking begins lots of it and in B movie style there’s some topless shots as the teens get drunker and drunker.

Then they wake up early in the morning and realise most people have gone, we get two in a life guard hut, four in a parked up car and one fat bloke trapped in a barrel with a cock drawn on his face from last night’s drunken games. It doesn’t take long for Kaylee to realise something is really wrong and she works out that the sand is eating the birds that land.

Strangely everyone seems to believe her straight away, there’s some kind of white hair/worms in the sand that poke up when anything living or meaty goes near them. From here on in it’s about survival trying to free the fat bloke stuck in the barrel, getting access to the phones all whilst staying off the sand.

There’s a couple of bloody deaths and a strange love triangle story between Kaylee ,her boyfriend Jonah and the girl he just shagged in the car Chanda. No one is coming to rescue them and when someone does it doesn’t really end that well for them. The worm beasts get smarter as the film goes on and also bigger, we learn that the weird egg two lads had found during their drunken exploits hatched out the monsters in the sand.

Obviously not everyone makes it to the end and Kaylee is destined to become the hero of the film. There’s a big final battle with the beast and the survivors are finally safe although they’re probably not going to visit the beach again any time soon.

I think this film is a slight guilty pleasure, it’s a fun movie but seriously lacking in some areas. The most annoying thing is it could have been really good, it may not sound it but bear with me. If this had some over the top gory practical effects and some better interactions between the characters played by better actors it’d be a class film. Alas it was not to be, with cheap CGI and average to poor actors in a film shot in 12 days you couldn’t really hope for much more. It’s worth a watch mainly for a bit of a laugh just don’t take it seriously and you’ll be fine.