I couldn’t decide what to watch and review next so I ended up asking the good folk on Twitter to vote. I then thought why not do my life in horror movies, I’d tweet two polls on Twitter each containing four films from 1981. They’d either be classics, ones I’d not watched in a while or ones I’d never seen. I tried to do the more famous ones in one poll and some other choices in the second poll. So here’s my thought’s on An American Werewolf In London……….

Tagline: From the director of Animal House — a different kind of animal

Trivia – John Landis had to avoid filming any full-frontal nudity of David Naughton during the transformation scene and dream sequences after Naughton informed Landis that he was not circumcised, even though his role, David Kessler, was written as being Jewish.

Trivia – Rick Baker claimed to have been disappointed by the amount of time spent shooting the face changing shot for the transformation after having spent months working on the mechanism. John Landis only required one take lasting about seven seconds. Baker felt he had wasted his time until seeing the film with an audience that applauded during that one seven second shot.

An American Werewolf In London beat away some stiff competition to win the first poll smashing fellow werewolf movie The Howling and My Bloody Valentine. Surprisingly it also edged out Evil Dead which is high praise for it’s popularity. Technically this film was released just before I was born but that doesn’t mean I can’t review it does it? Whilst nearly every horror fan alive should have seen this film I’ll still explain a little about the plot. 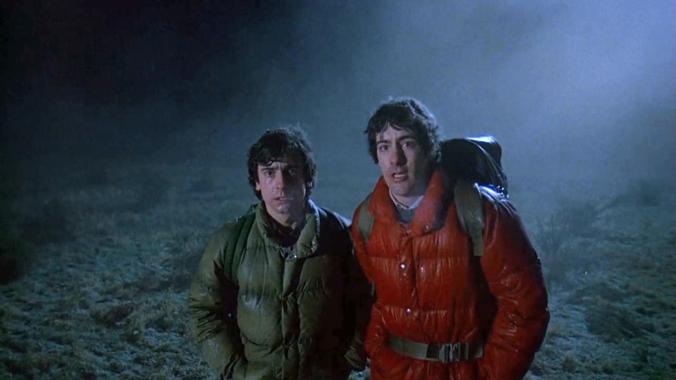 The film’s plot starts by introducing us to Jack and David two Americans in the back of a farmer’s sheep van back packing across Europe although for now they’re in Northern England. They’re dropped off and begin to walk through the miserable weather on a pretty aimless journey, along the way there’s some banter about Jack fancying a dull good looking girl.

They stumble upon a pub called The Slaughtered Lamb they enter and regret it almost straight away. The people in the pub clearly dislike anyone who isn’t local, there’s a five pointed star on the wall and candles burning. After the locals rip them they decide to leave but are told to stick to the roads, this doesn’t sit right with some of the locals who eventually follow them out as they know what the Americans will end up facing.

Once outside they start to get spooked and are soon attacked, Jack fails to make it and David gets bitten but soon rescued by the pub goers. These first scenes expertly put across the pair’s friendship as well as what the hell is going on, slapping us with some great and gory SFX.

David awakes in London in hospital and soon befriends the nurse taking care of him. As their relationship develops David is visited by the ghost of his friend Jack who’s trapped in some sort of purgatory doomed to walk the earth until the werewolves’ bloodline is stopped, meaning David has to die to free him.

From this moment on we get to watch David slowly lose the plot due to the visits of his dead friend. We’re treated to the greatest werewolf transformation to this day, soon David is out of control and he knows it. Despite the help of the Dr who tries to figure out what is really going on with David and the love of his new girl Alex there’s no saving David, I mean who could save a werewolf?

All this leads to a great fight out with the police and some real chaos being caused in the middle of London.

There’s really nothing else bad about this film, I’ve not watched it for about 20 years and I’d forgotten just how great it is. Everything fits right but especially the effects and the story in general as well as the abrupt ending. The werewolf films don’t get as much attention as the zombies, vampires and big monsters smashing stuff and there’s a good reason, I don’t think there’s been a werewolf film that matches this one. The other monsters all continue to produce great films, it’s arguable that zombies had their best days years ago but then up sprung The Walking Dead.

Great werewolf films have been massively outweighed by bad ones, off the top of my head there’s this, some of the Howling films and Ginger Snaps with not much else. This film is a classic and always will be, if you’ve not seen it what the hell are you playing at? Get it watched and get it watched right damn now! I’m going to do something I’ve not done since I created this site and award this a perfect ten.