I’ve always enjoyed this movie and I feel it’s often overlooked, however after posting about it on Twitter the common response was positive. Seems I’m not the only one who found it entertaining if a little silly in places. Anyway here’s my thoughts on Thirteen Ghosts.

Trivia – The special effects and sound mixing were so elaborate in this film, that many people claimed that the movie was physically painful to sit through.

The premise is simple at least to start with, ghosts are real and not only are they real but they can also be caught and I’m not talking four guys, particle beams and a trap. Rich, eccentric and evil genius Cyrus (F Murray Abraham) uses his “friend” Dennis (Matthew Lillard) and his ability to sense ghosts to trap them but no one knows why.

Dennis was hired to simply catch 12 ghosts for Cyrus and was offered a lot of money to do so. Problem is Cyrus dies and Dennis doesn’t get his money. His death does benefit one family at least on the face of it, as Uncle Cyrus leaves all his possessions to relatives Arthur and his kids. They go to find out what it is they’ve inherited turns out it’s a slightly strange house. Most of it is glass and is covered in strange writing, strange as it is the design is freaking cool. The lawyer meets them there to sign over the house he clearly knows more than he’s letting on. They also stumble on Dennis here as well after his money.

With the group all together they slowly but surely find out that the entire house is crawling with ghosts. Luckily they have Dennis who can sense them and they just so happen to have a few pairs of glasses that make them visible. They’re safe though as the ghosts are trapped in various cells and things like that are always safe aren’t they?

As it happens Uncle Cyrus was completely bonkers, he caught the ghosts so he could build a massive machine that’d somehow kill the ghost and embody him with limitless power, told you it was simple to start with!

The family along with Dennis and the babysitter as well as someone who fights for the rights of ghosts must now survive as the machine comes to life. Will they escape or will they die? 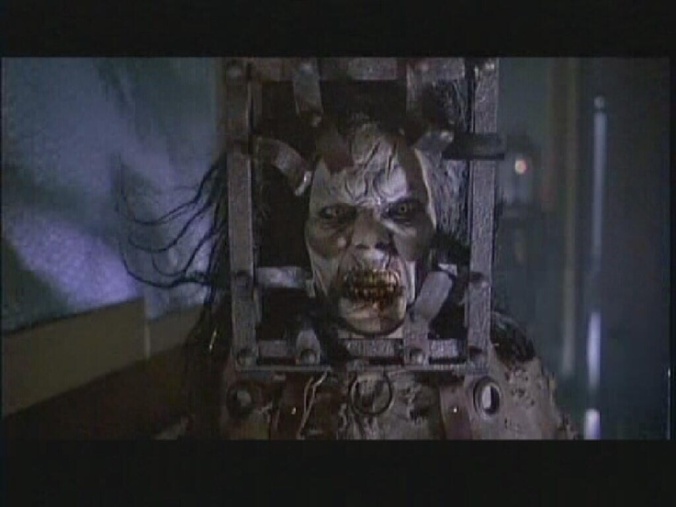 As I mentioned I think this film is often overlooked it’s not an Oscar winner or a top rate horror but it is an enjoyable watch. If you’ve got the time to kill and haven’t seen this then it’s well worth finding a copy and giving it a watch. It’s cheesy in places but the design of everything along with some really cool ghosts more than make up for any short comings the film has in other areas.