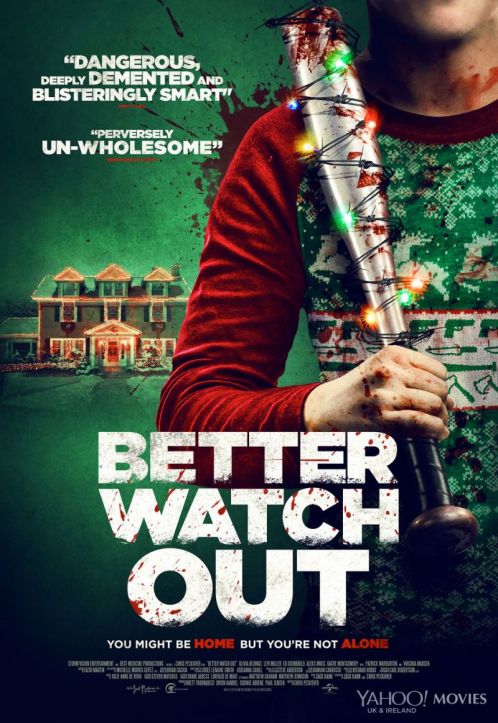 It’s that time of year again, the Christmas moviefests begin and I’m always trying to find some Christmas horror to watch but decent Xmas themed horror is hard to find. My missus was looking at the local cinema listings and for some reason they were showing this despite it being a year old. Normally we’d hop in the car and head to go watch, however if you live in England you’ll be aware that our whole infrastructure fails massively when it snows. So after looking out the window and seeing far too much snow to deal with we settled down to watch our first Christmas movie of the year from the comfort of the sofa.

Tagline – You Might Be Home But You’re Not Alone

I’m not usually a fan of horror that involves someone being stalked in a house but this works really well. It starts with babysitter and stereotypical horror teenager Ashley heading to babysit 12 year old Luke, it’ll be the last time she does as she’s due to move out of town. Luke and his best friend Garrett are messing around in Luke’s room and we find out that Luke has a plan to seduce Ashley even though he’s only a child.

Luke puts his plan into action but as you’d guess it doesn’t work and he hears a phone call between Ashley and her boyfriend that annoys him, so he starts to drink and try to act like a man. This still obviously doesn’t impress Ashley and it’s not long until the couple are joined by Garrett after he scares the crap out of Ashley.

As she starts to settle down things go from weird to bad, a brick through the window with a threatening message on it followed by someone outside stalking them, doorbells ringing and things moving round, Ashley is well and truly spooked. This is where the movie excels, I did not see any of it coming and it goes from average break in/stalker film to something totally different.

I can’t say what as it’ll spoil things massively so you’ll have to see for yourself but I will say it’s a really good watch with a great and surprising villain. We also get to see what would truly happen if one of the traps from Home Alone was recreated in the horror world instead of the family comedy world. There’s some nice twists at the end that keep you guessing and we also get an appearance from the double denim wearing 80’s teen hunk from Stranger Things.

That’s about all the negatives there are in this film, I consider this one of, if not the best Christmas horror I’ve seen in a long long time. It’s nicely paced with some good characters and a bit of humour chucked in here and there. The Home Alone scene is almost enough of a reason to watch on it’s own. So if you’re looking for some Christmas horror to watch then add this to your list!