So I’ve been away on my honeymoon and whilst over there in America we had a few hours to spare, so we thought why not go catch a movie? I must say the American audience in a cinema tends to react a lot more than us British do, sure we laugh when things are funny but that’s about it. Our American cousins seem to react to gory kills and stuff and are generally more engaged in the film. The film we watched was Halloween and here’s my thoughts……’ 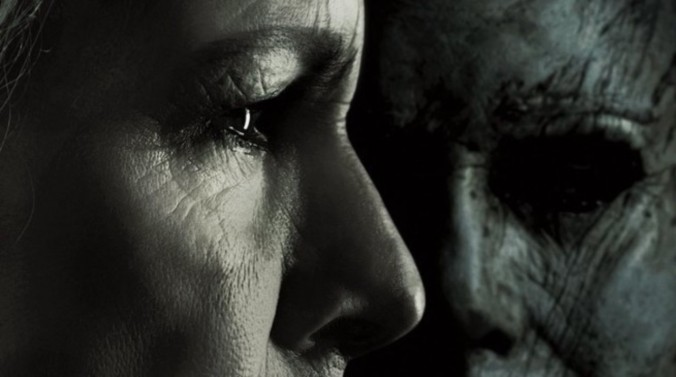 I’m not sure if you know but I kinda think all horror fans will, the new Halloween film erases all the others from the timeline bar the very first original one. I had re-watched the first Halloween before we went away as I knew there was a good chance we’d catch this one on our trip at some point. It’s a direct sequel to the first one and so far it has smashed the box office beating Lady Gaga and Bradley Cooper’s “bound to win an Oscar” film.

The slasher genre became a monstrous hit in the 80’s and to a certain extent it had a bit of a revival in the 90’s thanks to the Scream franchise. Sure there’s the odd ones that have popped up since like Hatchet and Charlie’s Farm but it’s a genre that’s been lacking recently. I am happy to report that this new Halloween really gives me what I’ve been missing.

Jamie Lee Curtis returns as Laurie Strode but she’s spent the last 40 years waiting to kill Michael Myers and it’s turned her a bit loopy. She lives in isolation and as a result her daughter and her granddaughter have suffered through their mum and grandmother being a bit nuts. She’s equipped her home with all sorts of booby traps and is armed to the teeth, awaiting His return.

Michael has been in a mental home for 40 years, he’s barely spoke at all, he just stands about looking crazy. The film does a tremendous job of showing us Michael without actually showing his full face during the first scenes that reintroduce us to him.
Things really go to pot when for some reason they decide to move Michael to another facility on Halloween night. You can guess what happens from here, he escapes and goes on a murderous rampage in his old stomping ground. Mainly chasing Laurie’s Granddaughter during a Halloween party.

During his rampage the film really takes off, I’m a sucker for nostalgia and Halloween wraps it around a bat and smashes you in the face with it and it’s wonderful. There’s all the kills you’d expect to see, some gory and some shown off screen and best left to the imagination. Obviously there’s several nods to the original film as you’d expect and in true slasher style it all leads to a final confrontation with our Scream Queen, however Laurie is ready this time.

Other than that there’s not much else I’d change in this film, it’s a hit of nostalgia that takes you back to the good old fashioned slasher films we loved in the 80’s. I’m hopeful that given this film’s success it can fire a few more of the these types of films to be made. I’d love a Candyman film, I’d be over the moon if someone decided to give Robert Englund another Freddy film or we got to see Jason return in a decent movie. This is a must see for horror fans old and new alike.