So I reviewed a kids film and now it’s time to give my horror fans what they want and review a new horror film. I’ve decided to review the latest Purge film, a series which has changed and evolved quite a lot over it’s trilogy life. 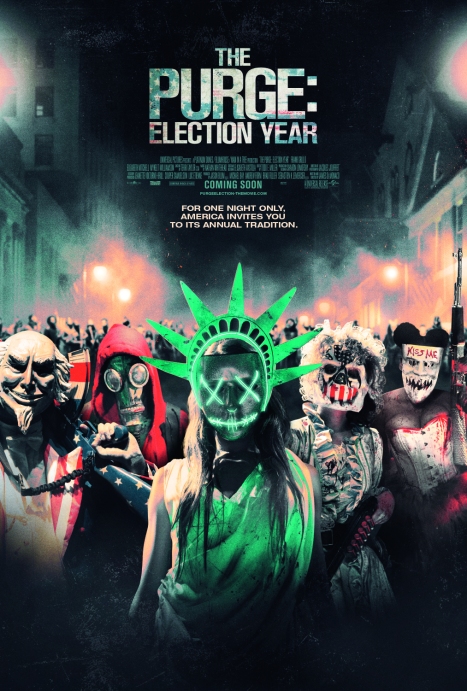 Trivia – This was originally intended to be a prequel, telling the story of the very first Purge. This idea was scrapped when Frank Grillo accepted James DeMonaco‘s offer to reprise the character of Sergeant Leo Barnes.

(I guess this means there won’t be another, although we’ve all heard that kind of thing before)

This is the third Purge film and for those that don’t know The Purge is ran once a year in America and for 12 hours all crime is legal. Your boss piss you off? Didn’t like the way someone in a store spoke to you? Drink driver killed someone you love? Someone shout at your dog?

Don’t react bide your time until Purge night go to their house and blow their brains out, it’s the American way!

This third film is split into two stories that predictably end up merging into one. Mainly it’s about Senator Charlie Roan played by Elizabeth Mitchell as she goes on a quest to try and end the Purge once and for all. Problem is the new founding Fathers of America don’t really like that idea.

Someone turns on the senator and from then on we see Leo played by Frank Grillo from the second Purge film now working for the senator trying to keep her safe through the 12 hours of the Purge.

Things pick up once the two groups end up together

The second story follows Joe played by Mykelti Williamson who runs into a foul mouthed little bitch in his story trying to steal, until she’s confronted by Betty Gabriel as Laney a woman who it’s suggested has a past as a hard case. When confronted the girl leaves but it’s obvious she’ll return, Joe is joined in guarding his store by fellow worker Marcos (Joseph Julian Soria) who also has a past.

The two groups clash and all end up helping each other through the night. It all leads to a massive shoot out towards the end with people all faced with tough decisions. Should you help someone who wants you dead? Are you the better person if you let things slide and don’t become the bad guy?

Leo returns and is totally kick ass as you’d expect

The whole idea of the purge is sheer brilliance, it’s so unique and paints a picture of a terrifying world. I’m sorry but I don’t believe anyone who says they’d like to live in a world where the Purge was real. Screw the big 7 foot supernatural monsters with massive knives killing naked teens, the idea of the Purge is a much more frightening prospect than that.

The ending is great, it could see a fourth film or this could be the end. I’ve said on Twitter that although it would never happen I’d love to see a real time mini series set with a bunch of people outside trying to survive the Purge!

The action sequences are well done as you’d expect and we’re treated to some great if a little predictable chase scenes throughout the film. 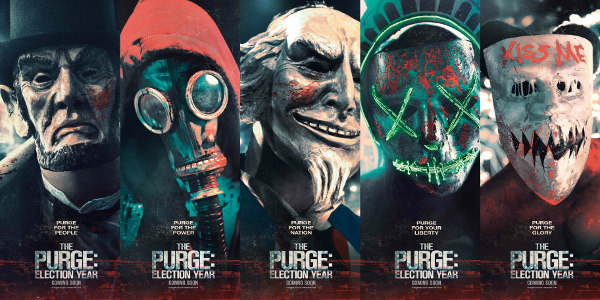 Not enough psychos, sure we get glimpses of the things that go on during the purge but I can’t help wanting to see more. I want to see the lunatics that enjoy going out and killing during Purge night. There’s just not enough of them for my liking.

Whilst every one of the main characters are solid in their roles I found some of the smaller characters weren’t that good at acting.

There might well be one but how can the creators of this trilogy not include a mockumentary about the history of the Purge in the extras, if they did they could take my money straight away!

I enjoyed this film and it succeeded where the second one failed and built upon the premise of the Purge. There are a lot more stories that could be told about this fictional time of year and I for one would love to see more, although I can’t help but feel this may well be the last one which is a pity as it’s a world you could keep building on and on.