My quest to watch some Christmas horror continues, I just Googled best Christmas Horrors and this one came up as a modern one that was worth a watch. I found a copy and thought why not? I mean a killer Santa is the staple of all Christmas horror isn’t it? This one has a really good cast and was better than I expected, it’s kind of a remake in that the maker acquired the name Silent Night, Deadly Night but it doesn’t stick the same plot and is only loosely based on it, so here’s my thoughts on Silent Night.

Silent Night starts like most slasher films do and should start with a couple of decent kills that show how mad the killer is. Sure it’s not great writing or awesome story telling but in a slasher I want some blood and guts and in the first scene Silent Night has a pretty good death scene and follows it up relatively quickly with another one.

They finally arrest someone and despite Aubrey knowing it’s not him that’s the killer the sheriff won’t listen. A close encounter with dying eventually brings Aubrey round to realising she’s a great cop, she finds the evidence and see’s that the killer is leaving presents with the victims and some people he leaves alive. This leads Aubrey to something that will drive her on for revenge. 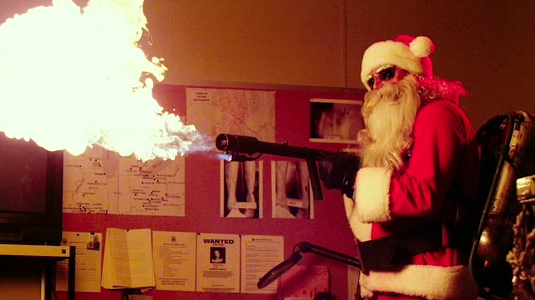 Everything leads to a final show down between the killer and Aubrey in what is a pretty exciting end to the film but it’s not over as we’re shown the origin of the killer at the very end of the film, which was a nice touch.

Apart from that there’s nowt really bad about this film, it’s not genre defining and doesn’t add anything new to the slasher genre. It is however a pretty brutal film with some gory deaths and a decent main killer. I’d consider this well worth watching at Christmas so go check it out!