I’ve been wanting to see this for a while now the concept sounded quite appealing to me and as a Star Trek nerd the idea of Captain Picard as a Nazi was intriguing. I had a few people on Twitter telling me it was a good intense film. Also given the recent tragic death of Anton Yelchin I figured I needed to see it. So I settled down to watch it and then review it for you good folk. 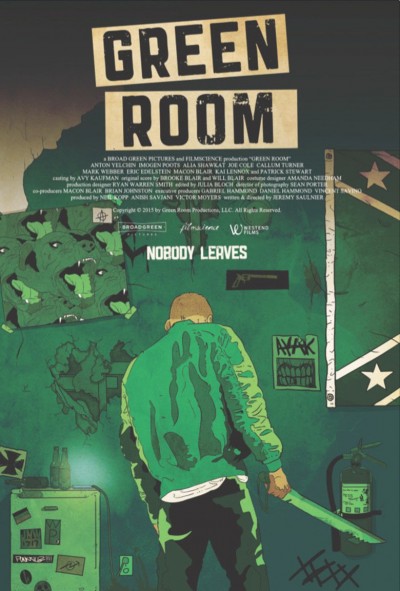 Trivia – Patrick Stewart said in an interview that when he finished reading the script at his country home in England, it was so terrifying that he locked up his house, turned on the security system and poured himself a Scotch. He then knew that he wanted to play the Darcy Banker role because a character that horrifying would be an incredible challenge and make for a compelling film.

Trivia – The stance of the machete wielder in the poster references The Clash’s “London Calling” album cover with bassist Paul Simonon smashing a guitar.

Poor little punk band off to steal some fuel

The story starts off showing us a punk band in their van, they somehow leave the engine running all night and as such run out of of gas. A couple of them head off to siphon some gas from a random parked car (this will become important a bit later on) before returning back to the van.

They head off to get interviewed by some guy who asks them their desert island band which will be revealed later on in the film. They then head off to play a gig but turns out it’s in front of about 8 people and they make about 6 dollars each.

After arguing with the guy who booked the gig he tells them they can play for his cousin as someone has dropped out, so off they head. Once there it’s clear that it’s some sort of gathering of Nazi’s, still they go ahead and play the gig.

Gig at a Neo Nazi/skinhead place in the middle of nowhere, what could possibly go wrong?

After the gig they collect their money and head out but one of the band forgets something, it’s here that everything turns to crap. When he goes to get something from the green room he witnesses a murder.

The band end up locked in the green room but manage to turn the tables and get their captor as a hostage. Now instead of storming the room and killing them all Darcy (Patrick Stewart) decides to put an elaborate plan into action. The plan is to send in some dogs to kill them and a few Nazi’s to take the bodies out without trying to shoot them.

The master part of the plan to place their van outside some private property making it clear they were stealing gas from the owner. Who also happens to have some dogs so all the wounds will seem like they happened when the owner of the land was chasing them off his property.

The rest of the film is a battle for survival as the band try to fight their way free along with a woman who was also present at the murder. This is quite intense with some good chase and hiding scenes.

Patrick Stewart in possibly the most different role of his career

The film is intense and at times you really can’t see how the hell anyone is going to survive which only adds to the really good atmosphere the film creates.

The acting is solid and as I mentioned seeing Patrick Stewart as the head of a bunch of Nazi’s is a strange but fun sight. All the other actors fit their parts really well and are solid actors.

There’s some decent gore scenes dotted around especially when someone gets their arm broken, although these scene are few and far between.

There’s some gun shots, knife wounds and gore but should have been more!

Might sound strange but the plan that the whole film revolves around just seems odd to me, there’s loads of Nazi’s surely there’s a better way to get rid of a handful of punk kids than having such an elaborate plan that requires so much to fall into place.

Although there are some decent fight scenes and lots of running and hiding, I felt they should have gone all out to give us some fun deaths. As things turn out there’s just not enough violence for my liking given the premise of the film.

This is well worth a watch especially if you’re a Star Trek fan (not sure how much Trekkies cross over with horror!) If no then it’s still worth your time, personally I don’t think it has any replay value but it is a film that you won’t regret watching once.