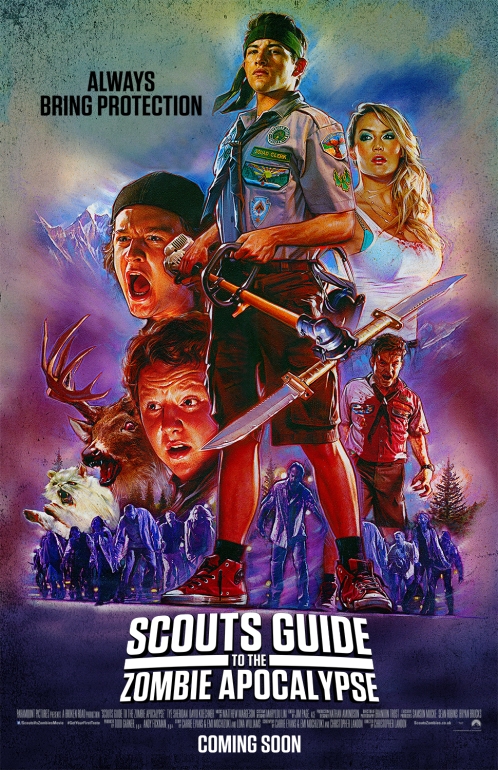 When asking for comedy horror recommendations on Twitter I got loads of people mentioning two films Cooties, which I watched the other day and Scouts Guide to the Zombie Apocalypse. Being as I watched one recommendation and enjoyed it why wouldn’t I listen to my Twitter horror followers and put this one on.

Trivia – The screenplay for this film was featured in the 2010 Blacklist; a list of the “most liked” unmade scripts of the year.

Trivia – Features adult film star Missy Martinez as the female police officer whose uniform gets caught in a fence and flashes the scouts.

This film starts exactly how I like my zombies films to start, with a reasonably gory scene with at least one good kill in it. A bumbling janitor is doing his nightly rounds and decides to clean the laboratory where a somewhat arrogant scientist is working. The scientist leaves to go get some food and the janitor snoops around, he ends up stumbling into a room with a man who looks quite dead. For some reason the idiot decides to grabs the mans wrist and he twitches making him stumble back into the machine messing it up. He panics and tries to give the corpse CPR but his hands go gorily straight through the mans chest. The scientist’s food is stuck in the machine and unluckily for him he gets his arm stuck as well, meanwhile the janitor tries to fight off the zombified man but doesn’t succeed. This leads to him leaving the room as a zombie himself where he has a munch on the scientist. 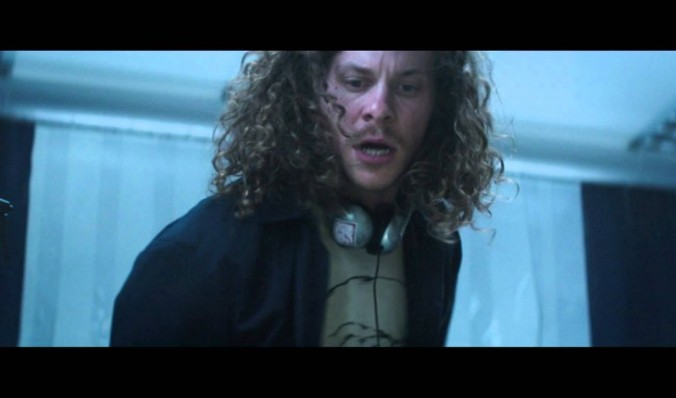 The idiot janitor who can quite clearly be blamed for all of the deaths in the film!

After this we’re shown three best friends Ben, Carter and Augie who are all scouts. It turns out that Ben and Carter aren’t really into being scouts any more and want to leave but don’t want to upset the scout master or their best friend Augie. As they discuss leaving the scouts during a trip in the car they hit a deer and kill it (or do they?) this makes the front tire burst and they stop to fix it all up. We are then introduced to Carter’s sister, her idiot boyfriend and a slutty looking girl, they tell Carter there’s a secret party that night and invite him and Ben along. It’s from here that they go to get some beer for the party and we are introduced to the amazingly cool and kick ass Denise Russo.

Ben and Carter decide to go to the camp with the scouts and leave in the middle of the night. Scout Leader Rogers (David Koechner) doesn’t make the camp but it’s best if you see how and why yourself. This leads to a montage of the three scouts enjoying their selves before Ben and Carter try to slip away to the party, however Augie catches them and he’s heartbroken but tells them to go anyway. 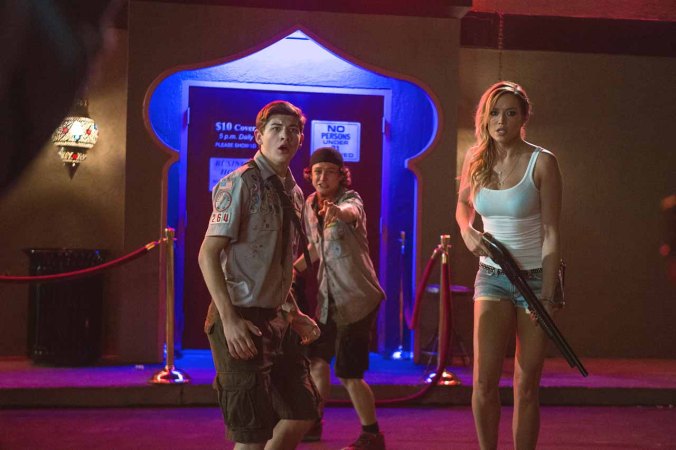 Ben and Carter leave and head to town but notice it seems that no one is around. This leads them to sneaking into the strip club which is also empty, a stripper comes out and performs a dance but as she twists upside down her head begins to fall off and the boys are attacked. Eventually they’re rescued by Denise and a shot gun. Once outside the strip club they realise it is indeed a zombie apocalypse, Denise fights off the zombies as they make their escape.

The film then centers around various encounters with zombie cats and normal zombies as the group try to get to the secret party before the army bombs the entire town. It’s an hilarious and entertaining ride to the conclusion of the film and I enjoyed it immensely. 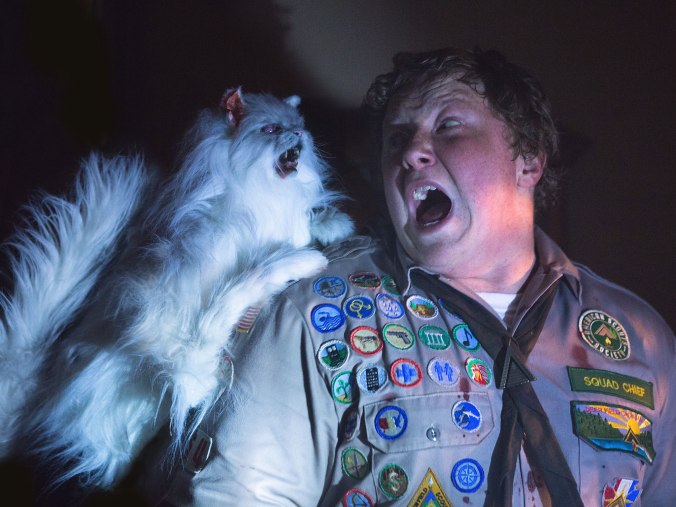 Denise is awesome and the other characters all play their parts well especially David Koechner as Scout Leader Rogers who keeps coming back even when he’s dead. The weapons are quite unique in zombie films especially a spud gun device that fires door knobs. The zombie kills are all fun to watch and the basic the story is pretty solid especially for a zombie film.

I really can’t think of anything bad to say about this film, it’s not perfect but there’s nothing that stands out as being bad.

Overall this film was a cracking watch with gore, inventive kills, zombie deer, zombie cats, a kick ass hot woman, good characters, a great ending and some good humour. I’d highly recommend anyone into comedy horror give this a watch, it’s not quite as good as Deathgasm, Brain Dead or Bad Taste but it is reasonably close.

4 thoughts on “Scouts Guide to the Zombie Apocalypse (2015) Review”